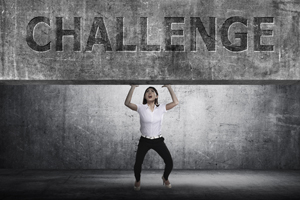 RFP season is here, putting the display advertising world in the mindset for 2017. With the new year coming up, advertisers, agencies and publishers may be considering new tools that can be used to analyze the success of a campaign. Viewability, a measurement of how many ad impressions are actually seen by a human, has rapidly moved up the metric ranks.

Viewability (A.K.A. in-view rate) is a significant metric, but should not be considered the only metric that defines a good campaign. While viewability is still an important variable (if an ad is not seen then no one can engage with it), engagement metrics should also be added to the primary KPIs of ad performance.

A good viewability tool not only measures the in-view rate, but also measure how users are engaging with the ad (before they take the next step, click through and possibly convert). To get the most out of ads, advertisers and planning agencies should consider a tool that will help them make decisions about placement and engagement with their ads. The beauty of digital advertising, is that placements can be changed on the fly. With a good viewability tool, advertisers are assured that they can measure the effectiveness of their ads, and make changes when campaigns are not reaching expectations.

No viewability tool is perfect. Tools can have difficulty measuring impressions due to a variety of reasons: old browsers, serving ads through multiple servers, IVT (invalid traffic), user computer issues like connection problems, etc. Useful tools are the ones that measure at least 90% of all of the impressions that are being delivered.

Transparency is another aspect of choosing a viewability tool. “The vendors that are worthy are the ones that tell their clients what they do and how they do it…publishers shouldn’t work with the ones that are not transparent to their own customers, but publishers also need to know what to ask” (Schiff, 2016). The more that the vendor can tell the user about how they are collecting their information, especially concerning IVT, the easier it is to figure out how to improve the in-view rate.

Tools that are on the MRC accredited list should be the only ones that are considered in a media plan. The accredited Viewable Display Ad Impression Tools are as follows: Adloox, AdYapper, AppNexus, comScore vCE-Validation, DoubleVerify, Integral Ad Science, Markit On Demand, Meetrics, Moat, Pixalate, RealVu, Sizmek, WebSpectator. Take a look at the list of MRC accredited companies for viewability and other metrics.

eHealthcare Solutions conducted a case study on the viewability tools that it has been able to work with this year. These tools include IAS, Moat, DFA Active View, and ComScore. 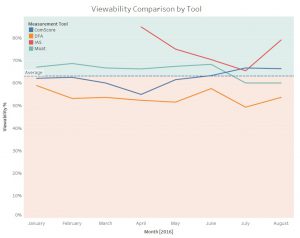 After analysis, EHS concluded that Moat was the best vendor for the following reasons. It should also be noted, that none of the other viewability tools do the following; these features are unique to Moat:

While in-view rate is a significant metric, other metrics are helpful to determine the success of a campaign. With an all-encompassing tool like Moat, it is easier to develop a measurement plan that surrounds the total effectiveness of an ad campaign. Advertisers should consider choosing a tool similar to Moat — transparent, easy-to-use, and continually updated to ensure efficient campaign measurement that allows for making changes on-the-fly.